Commissioned by Fort Worth Contemporary Arts, this piece took the American college campus as a starting point, especially how Neo Classical design has been used a kind of template for this idealised city of learning, borrowing that sense of (patriarchal) power and authority from the grandeur and weight of the architecture.

Words from the curator, Sara-Jayne Parsons: Power, gender, status and the symbolic meaning and language of architecture are reflected upon and explored through the abstract narrative of her film. Her costumed protagonists, performed by choreographed dancers, are suggestive of ancient Greek Caryatids (female figures carved in stone that served as architecturally supporting columns) who are liberated here from their traditional weight-bearing, static roles. Elsewhere in the exhibition, sculptures and wall drawings reference classical architectural forms, including structures that serve as thresholds and hybrid architectural furniture and suggest a fluid, performative, even ritualistic space of interaction and exchange. Their shelves and niches function as a platform for the display of a series of small-scale clay models, which might suggest a soft remaking or reimagining of monumental stone buildings. 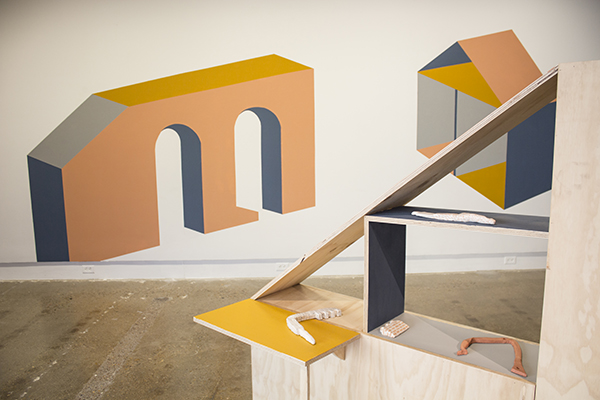