This work was inspired by Kafka's short story 'The Burrow' and looks at the difficulties of watching over something and then finding yourself outside of it. The hunting tower (seen during my stay in Austria in 2009) looms over the smaller pieces, maybe guarding, maybe vacant. The title refers to the shelter-type 'dug out' in this structure, but also to the sods of angular earth lying on the floor. The drawing on the floor is of Hashima, or 'Battleship Island' in Japan. This place was built upon during its boom years as a mining centre. Eventually, there was so much building, all concrete, that the island started to fall in on itself and is now so dangerous that access is only by guided tour. The clutching hand is a symbol of an attempt to hold onto something, but it's empty, as sometimes the harder we try to hold onto something, the less we have of it.

This work was exhibited at the Liverpool Art Prize exhibition at Metal, Liverpool. 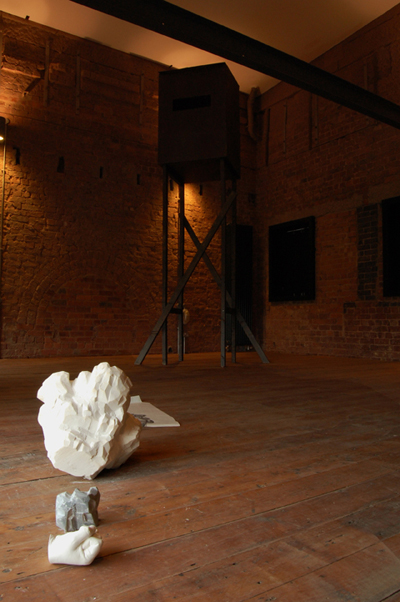