Inhabitant (St Louis) is the second incarnation of this work, the first taking place in Linz, Austria in 2009. Some words below from Dana Turcovic, the curator of Camp Out , the exhibition that the work was made for at Laumeier Sculpture Park, St Louis:

Emily Speed’s work titled Inhabitant (St. Louis), 2012, was informed by her time spent in residence in St. Louis prior to the opening of the exhibition. In her work, Speed is interested in exploring the temporary and the transient by interweaving references between architecture and the human figure. Made of cardboard, electrical tape and acrylic, the artwork is both shelter and clothing—Speed wore Inhabitant (St. Louis) for a hilariously fun performance during the opening reception. This sculpture-turned-costume not only references both her interest in how people carry around their collected experience of cities lived and traveled, but it also provided poignant moments by her posing next to and situating her work in relation to some of our more historical sculptures at Laumeier by creating a series of comparisons, illustrating how public sculpture has changed as an artistic practice.

During her 10-day residency, she visited some of the top 10 sites listed in her guidebook, including The Arch, Laclede’s Landing, City Garden and Crown Candy, among others. Also, to give her a sense of the countryside in Missouri, and the current stretch of suburban sprawl, I invited her along to a family barbeque in Dittmer. After completing the building of the sculpture here at Laumeier, Emily and I went back to these sites to photograph her walking around inside Inhabitant (St. Louis) harnessed to her shoulders and interacting with the buildings and neighborhoods built into the work. Determined by the environment in which it was created, Inhabitant (St. Louis) is uniquely site-specific, as it has taken on characteristics of our local architecture, found materials and Laumeier’s unique landscape within suburban St. Louis. 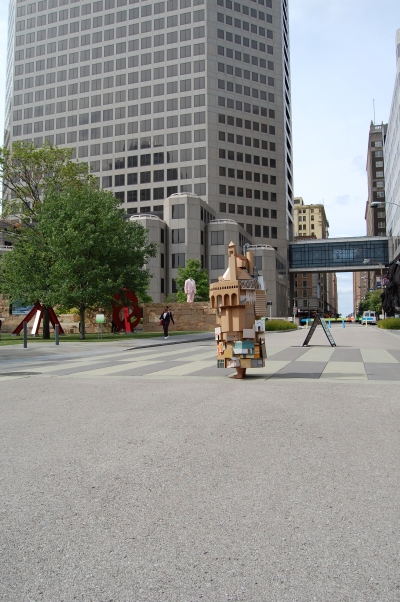