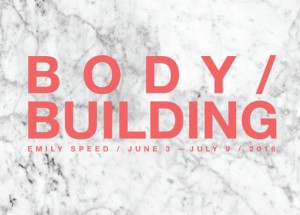 Solo exhibition: In BODY/BUILDING, ‘Groviglio (Tangle)’ is a two-channel film that considers the city (in this case, Rome) as a kind of palimpsest and the layers of activity from millions of inhabitants that have been erased, rewritten, replaced and overbuilt. A series of photographs and a short looped film comprise ’Sketches for Build-Up’, the results of many hours Speed has spent working with acrobalancers exploring the body as a kind of building material. ‘Brick Parade’ is a playful performance, where two brick walls will divide, contain and disrupt visitors to the exhibition. Following the opening, these costumes will be available for visitors to wear.