Last week I spent the week in Venice at the invitation of Wave Particle, who are the lead artists and anti-curators on the Scotland + Wales collateral project for the 16th International Architecture exhibition at La Biennale di Venezia, which was commissioned by Architecture & Design Scotland. The Happenstance is a project involving lots of artists and architects, showcasing practice that has play at its centre. As well as a profile of my practice in the main exhibition, the film reel in the venue includes my short film of a workshop that happened in April in Aberdeen with twelve incredible young women working with Jack Webb and I to make a piece of work at the invitation of Look Again Festival and City Moves Dance Agency. The beautiful camera work on it is by Duncan Nicoll. You can find out more about this work, Façades/Fronts, which will be performed live on Saturday 16th June in the centre of Aberdeen, here

Central to the (non) pavilion in Palazzo Zenobio is Baxendale‘s structure, 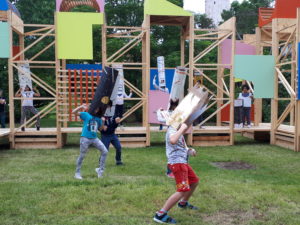 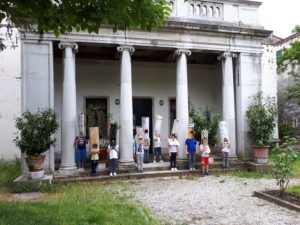 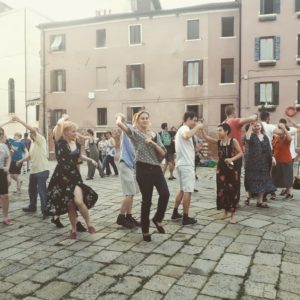 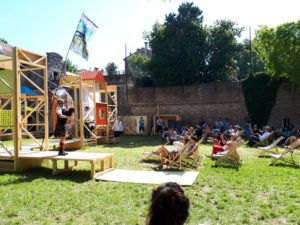 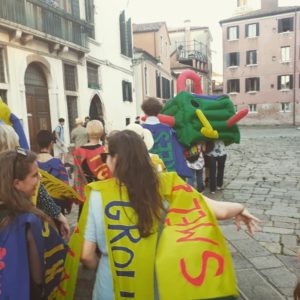 a timber framed corridor of sorts with the potential for endless change and adaptation. The construction of this was an enormous group effort with many of the artists helping to realise it, especially Francis Thorburn and Brian Hartley also assisted by some amazing Venetians including Giovanni Sambo, Sandro, Jesus (yes, really) and the awesome Alberto Lago, who has been a driving force on the whole project, among others.

I was lucky enough to do a workshop with 18 children from S. Francesco di Sales primary school in Ca’ Zenobio’s garden, where we thought about shelter or refuge as a necessary place to feel free and to be able to play. They made column costumes in pairs so as to be one support among the group, who together were strong and ready to support anything. They were amazing and the workshop worked out despite my pretty shonky Italian (much miming).

The opening event on Friday gave me a tiny glimpse of what might happen in the garden of Palazzo Zenobio over the coming month – a steady flow of visitors came in and out, with children from the local school arriving in the afternoon, word having spread of this incredible garden space. People lounged, laughed, played, ran, climbed, ate pizza, drank prosecco, watching huge films on the giant screening wall, lay in deckchairs and in the shade of the structure, skateboarded and invented. It was really pretty incredible indeed. We all joined in the local sagra later that evening with a parade and attempted to teach some locals the Gay Gordons (tricky when only half the crew know it to start with)