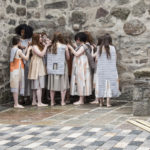 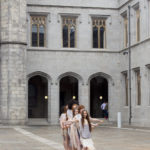 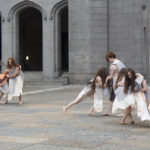 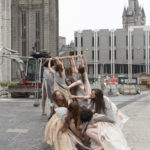 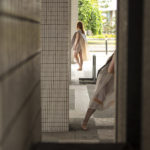 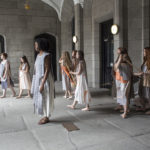 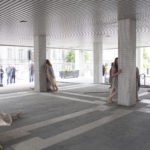 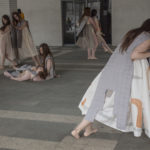 On Saturday, the live version of Façades/Fronts was performed twice in Aberdeen as part of Look Again Festival. Although it probably seemed like the main deal from the outside, the project has been in development since last October, so it was in fact, a lovely end to a really incredible journey. Building on recent works, including Body Builders, commissioned by Fort Worth Contemporary Arts in Texas and Rooms Designed For a Woman, commissioned by Yorkshire Sculpture Park last year, Façades/Fronts also takes the relationship between Women and Architecture as a starting point. In this work though, it is young women in particular who are the focus and their bodies contrast starkly with the imposing granite of the Civic and University architecture here.

Friendship between girls and the familiar gestures that brings; a hand on an arm, a head resting upon a shoulder, plaiting hair, straightening clothes, hand-holding, play-fighting, twinned dance moves, the group identity in a subtly different but still-marked uniform. Remembering what it felt like to be getting ready for a night out in someone’s bedroom and just being ridiculous together. I wanted all of these things to feed into the work and to allow a group of young women to have a space within the city where they felt powerful and could go wherever and do whatever they needed to, together. The simple act of putting these young women into places that have very traditionally been occupied, built and controlled by men seemed to be enough.

Sally Reaper at Look Again Festival very shrewdly set up a situation where I was able to invite a choreographer to work on this  (she was definitely paying attention to where the work wanted to go) and City Moves Dance Agency suggested a few names, including Jack Webb. In March, Jack and I met and discovered we had a lot of shared interests. We spent an intense weekend discussing the project and exploring the possibilities for movement. He has done a beautiful job of translating the ideas into moving bodies, and watching his choreographic process with the dancers was a total joy and privilege. The film of our first workshop with the dancers in April this year is currently showing as part of the International Architecture Exhibition at La Biennale di Venezia in The Happenstance, the Scotland + Venice collateral project.

To the dancers, who formed the most amazing community in the shortest period of time – Katie Taylor, Kirsty Tewnion, Melissa Haywood, Katie McFarlane, Neila Stephens, Xenoa Campbell-Ledgister, Ella Skinner, Isla Reid, Kirsten Walker, Carly Campbell, Bethany Ransom (sadly not here this weekend, but an important piece of the journey nonetheless) and Iseabail Duncan -You are all totally incredible and I really hope we cross paths again.

Thank you to Duncan Nicoll for the beautiful film work and to Jo Muir for her additional support. As always, thanks go to Ruth Eaton for her help with the costumes and use of sewing machines. But most of all, thank you to Look Again Festival – especially Sally Reaper, Claire Bruce, Hilary Nicoll, Laura Reilly and all the volunteers who work on the festival – for the belief in my work, demonstrated by the free reign given on the project – the best way to support artists and allow them to move their work on. Also to City Moves Dance Agency who jointly commissioned the work and also gave us the beautiful Dissection Room to work in. Also to the University of Aberdeen for access to the Debater and other spaces. Now to let it all sink in….