The artists featured in Silence Unbound often work in familiar forms, but have at some point been driven to create or conceive of an object that incorporates their language into a book-like design. The juxtaposition of the book next to an artwork- painting, print, photograph, or performance ephemera- is meant to delineate a space that considers the translation of the artist’s aesthetic vocabulary into writing systems. Featured Artists include: Dean Ebben, David Hammons, Candace Hicks, Christopher K. Ho, Jenny Holzer, Alison Knowles, Jessica Lagunas, Matthew C. Lange, Dani Leventhal, Barbara Rosenthal, Buzz Spector, Emily Speed, and Kristen Tordella-Williams.

On the 22nd Jan I will be heading to New York where I am to be on a panel for a seminar about artists’ books at the Grolier Club. This is happening alongside an exhibition of works from the Women’s Studio Workshop (WSW) collection, entitled ‘Hand. Voice & Vision’. The book which I worked on at WSW in 2007, Unfolding Architecture, is part of the exhibition and I have also written a short text for the exhibition catalogue. 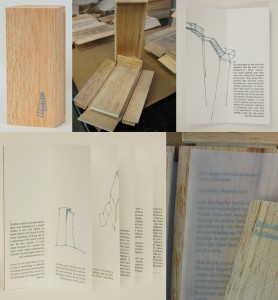 My time at WSW doing the Artists Book residency was really incredible and I am really looking forward to catching up with the staff at the seminar, as well as meeting the other artists on the panel. I also have plans to meet the guys from WAGE, to profile them for a-n’s March issue. I’ll be leaving some space in the suitcase for letterpress ink and drawing papers from the Drawing Center!!