On Tuesday I am heading back to Austria to work for six weeks at Atelierhaus Salzamt in Linz. I was there for three months in 2009 as part of the Urban Interventions exchange with Liverpool Biennial so I’m thrilled to have been invited back. The City of Linz have purchased ‘Inhabitant’, the work I made during my last visit, for their collection, and it will also feature in a publication about their new collection in 2013. Here is a shot of the last visit with me performing Inhabitant and having some kind of encounter or stand off with the little yellow train and its occupants! 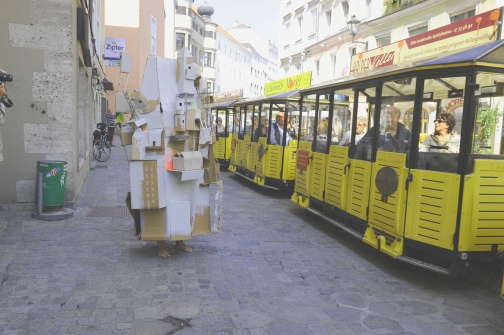 Photograph by Jens Sundheim, who was fantastic company last time, wish he was going to be around again. The first picture on his website is from Bellevue, the ‘Yellow house’ – one of the 2009 commissions in Linz, a great reminder of how strongly yellow featured in my last visit. I still haven’t gone through all the images he and Mehmet Dere took of that walk so it’s nice to look back through occasionally and find new ones.

Last few days in the studio on the work for the Topophobia exhibition, opening at Danielle Arnaud on 13th January. ‘Star Fort’ will be a fold up structure built and documented in the gallery (some preliminary sketches for the work shown). The second leg of the show, at the Bluecoat from 2nd March, will also feature a newly commissioned work that will occupy the corridor space. 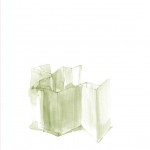 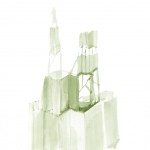 The fear of place and the manifestation of this in contemporary art is the territory for TOPOPHOBIA. As an anxiety disorder, this phobia is understood as an irrational dread of certain places or situations, yet, considered as a cultural phenomenon topophobia connects us to the existential human question of how each of us finds our place in the world. The exhibition and related publication take a look at the representation of place and space as threatened or threatening.

TOPOPHOBIA is a group show featuring the work of ten UK and international artists. The range of media and approaches is wide. Anne Eggebert makes detailed drawings derived from images on Google Earth; Matthias Einhoff uses high-end corporate video techniques to make a spectacle of an urban wasteland; David Ferrando Giraut creates a state of anxiety with his filmic pan of the aftermath of a car accident; Polly Gould constructs distorted topographical watercolours reflected in the surface of a globe; Marja Helander depicts herself out of place between her two cultures of contemporary Finland and Sami nomadic heritage; Uta Kogelsberger reveals uncanny night visions of urban and desert America in her photographs; Almut Rink appropriates the 3D software used by architects to take the viewer on an imaginary journey in a virtual space; Abigail Reynolds exposes disjointed time and place in her use of old book illustrations in collages and assemblage. Emily Speed houses her body in a fortress made from shutters; and Louise K Wilson uses sound derived from her work at a previously top secret Cold War testing site.