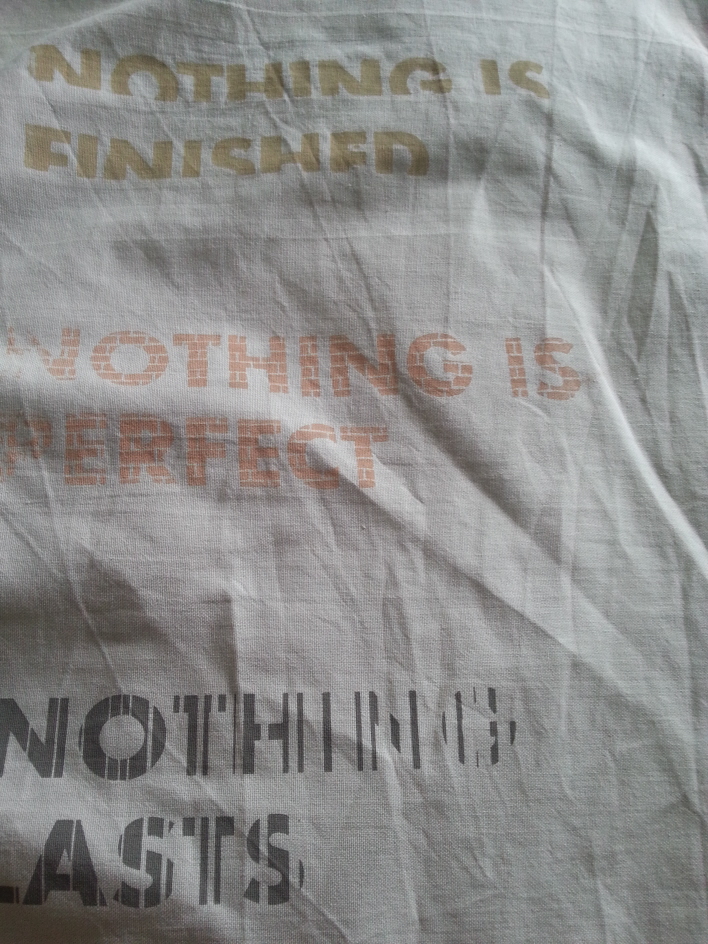 I’ll be showing some drawings and a new multiple – a tea towel, with the very lovely Aid & Abet at Sluice Art Fair next weekend. Loads of great artist-led activity showing there so well worth a visit, including my own studio group The Royal Standard. Go!

Last week, I was building, tiling, painting and gardening in Bristol at the incredible Tyntesfield, a National Trust property making a new work for ‘STILL/life ecologies of perception’ the inaugural exhibition from Trust New Art Bristol. 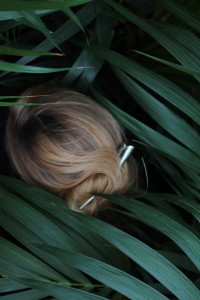 The exhibition runs from 8th September until early November and the bumpf about the new work is here:

Lady Garden is a new installation which takes its name from an intimate walled area adjacent to the Orangery at Tyntesfield known as Lady Wraxall’s Garden. The structure, which can be entered, encases a micro garden of plants typical to an Orangery. It is able to move between various locations in the Jubilee Gardens and once settled, becomes part of this constructed landscape, a hybrid garden and folly structure. On close inspection the structure mimics a range of architectural, ornamental and design motifs from the house, such as the Turret Room, Minton floor tiles, floral wallpaper and the coloured gloss paint found in some utility areas.

The structure provides shelter in a compartment that is just big enough for one person. This compartmentalization makes reference to the strong gender division of roles and division of rooms in Tyntesfield which was usual in Victorian country houses. The Morning Room, Drawing Room and Mrs Gibb’s Sitting Room (now Lord Wraxall’s sitting room) were primarily female spaces, while the Oak Room and Billiard Room were chiefly used by the men of the house.  The architectural and decorative divide between male and female spaces would serve to enforce role distinctions, much as the growth of plants and flowers in Lady Garden are contained and controlled within its structure.

‘Lady Garden presents its best face to the public but that contains a leafy, wild garden inside’ Emily Speed 2013 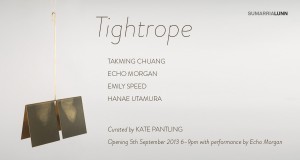 Curated by Kate Pantling, Tightrope brings together the work of four international emerging artists Takming Chuang, Echo Morgan, Emily Speed and Hanae Utamura. The artists share a performative approach to their practice, where a sense of harmony, dissonance and a raw energy are connecting threads. Each artist takes their own body as a starting point, orchestrating narratives that explore the impact of encounters with materials, environments and cultures. Their work is personal, particular and often intimate but speaks to broader political and cultural concerns. By approaching their work from the context of performance, the artists bring a strong sense of dramatic tension to their artworks. Each of them embraces the visual impact of their interventions to create work that encapsulates a moment imbued with anticipation. They create projects that play across multiple mediums eluding easy categorisation and bringing dynamism and depth to the expression of their ideas.

My new print (made with amazing printmaker Emma Gregory) Sfogliatelle is currently on sale at the Bluecoat to help raise money for the Print Studios.  Each print is £120 (unframed) and they are available to purchase from Tickets & Information in the hub. 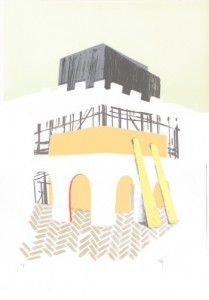 Sfogliatelle (a type of Italian pastry and meaning ‘many leaves/layers’) continues to explore a sculptural work Facades/Flats that Emily Speed made in Rome in 2012. Façades/Flats looked at the layers of theatrical façades that exist within a city, especially those whose bricks, design or size communicate power and clearly signify exclusion. Speed is also interested in the ever-changing nature of cities and how quickly buildings appear and disappear. In the print, several layers do not really exist; they are made using only negative space and hopefully create a slippery space that one can never be totally certain about.

Yes I do. And if you’re in Edinburgh this Wednesday 7th August, you should come along to a film club night Elizabeth Murphy and I have put together for Edinburgh Art Festival at New Media Scotland. I did a commission for the festival last year (Human Castle) so I am really pleased to be a tiny bit involved again

‘I Like The Way You Move’ is an evening of film and performance featuring – Romany Dear, Andrew Gannon, Candice Jacobs, Serena Korda, Jen Liu, Lucy Pawlak and Catherine Payton. They are all BRILLIANT.

Murphy and Speed have selected the programme after ongoing conversations about their shared excitement when melodrama, slapstick, dance, hysteria and glamour are integrated into contemporary practice.

A couple of my Body/Building polaroids were included in the inaugural issue of Paperwork Magazine.

I was also awarded one of the Standpoint Futures residencies for 2013/2014 so I am looking forward to spending 6 weeks in London next spring and getting some really valuable studio visits! 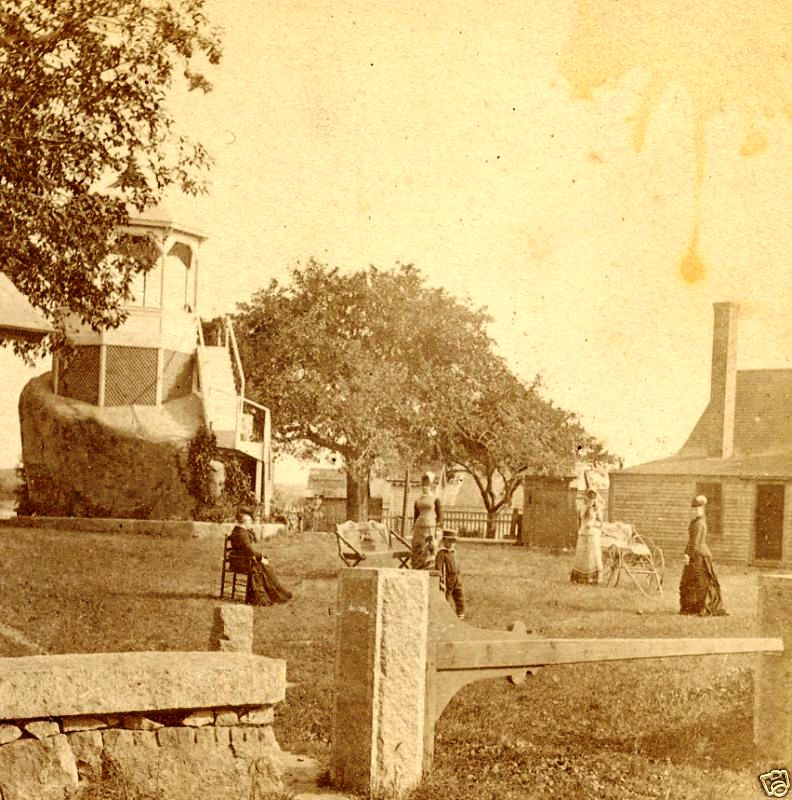 Tomorrow I shall be heading for Cape Ann, Massachusetts for a few weeks, to work on a short research project. At the invitation of Jane Deering, I shall be working in a small village there for a period of time that is intended to give artists some time and space to create new work.

At the property there is a huge granite boulder in the garden, which used to have this amazing pavilion/bandstand structure upon it. The whole area has a mass of large granite boulders left during the last ice age and I love the idea of these huge stubborn things left unmoved for centuries. An abandoned quarry town nearby, Dogtown, is now a natural park with the old roads acting as footpaths. Here, a philanthropist, Roger Babson hired stone cutters to inscribe boulders on the old common with words of inspiration during the Great Depression. I have no idea what will happen here but I shall let you know.

I have some images of Panoply in the new Nyx issue #8: Skin, alongside a fantastic text written by Laura Mousavi in response to my work. There will be a launch event on Friday 10th May at the Bussey Building, Peckham, London. Facebook event HERE

On Tuesday 23rd April, I shall be in conversation with Sally Tallant, who nominated me for the Northern Art Prize, about the work in the exhibition at Leeds Art Gallery. The talk begins at 6pm, more information HERE. 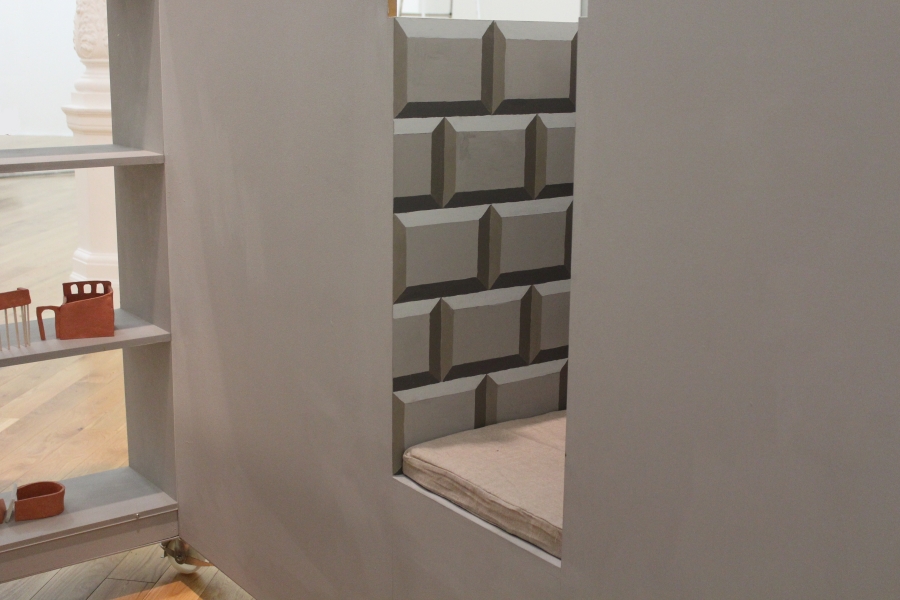 I’m very happy to be included in this year’s Drawing Biennial at Drawing Room, London. The event is also a fundraiser, so all works are for sale, starting at £250. Drawing Biennial 2013 works will be available to view online from 10am Thursday 18 April and over 200 artists have contributed so loads to choose from.